In GM, UAW is picking its biggest fight first

DETROIT — Among the Detroit 3, the UAW may have the toughest time negotiating a new labor contract with General Motors, the company it chose last week as its initial target, but it also stands to gain the most from GM.

DETROIT — Among the Detroit 3, the UAW may have the toughest time negotiating a new labor contract with General Motors, the company it chose last week as its initial target, but it also stands to gain the most from GM.

Over the past four years, GM has amassed the largest profit among the Detroit 3, a fact not lost on union leaders making a case for raises and other benefits. GM also has the lowest U.S. plant capacity utilization rates, leaving numerous options for the UAW to wrangle new product commitments and potentially convince GM to save a plant or two among those it "unallocated" last November.

That stands in contrast to Ford, which already builds more vehicles and employs more workers in the U.S. than any other automaker, and Fiat Chrysler Automobiles, which has the highest capacity utilization of the Detroit 3 and this year announced plans to open a new assembly plant in Detroit.

"But the flip side is they still have some slack in the system that if they dig their heels in could certainly cause some problems. I expect we're going to see some fireworks."

With just days remaining before the UAW's current four-year pacts expire Sept. 14, representatives on both sides are sitting down to negotiate in earnest.

Talks were "progressing slowly," UAW Vice President Terry Dittes said in a Sept. 5 letter to officials who represent GM plants around the country.

The union has called leaders of its GM locals to Detroit for a Sept. 15 meeting, saying they could be asked to either vote on a tentative deal, review the company's latest offer or take other actions as necessary.

Colin Lightbody, a former FCA negotiator who's now president of a consulting firm, said subcommittees will continue meeting until top leaders ultimately step in to consummate a deal.

"You're feeling each other out," he said. "You get hundreds of demands, so you're trying to weave your way through all of them to find which ones they're really serious about and boil that down to about five or 10 items."

Those items, from the union's perspective, likely include protections to health care benefits, a quicker path to top wages for newer employees and more opportunities for temporary workers to attain full-time status.

In addition, Lightbody, who has been involved in negotiations since 2003, said he thinks any deal with GM will potentially need to include the reallocation of product to at least one of the plants GM chose to idle.

"I think it's going to be very difficult to ratify an agreement the first time through," he said. "That would look like a real win for the union."

Since GM in November announced its plan to close five North American plants and put the jobs of thousands of workers in jeopardy, the UAW has railed against the decision, with union members staging protests outside the Detroit auto show in January and the July handshake ceremony that formally kicked off negotiations. UAW leaders have vowed to use this round of bargaining to reopen some plants, even after GM entered discussions with electric vehicle producer Workhorse Inc. to sell the plant in Lordstown, Ohio, and secured jobs at other locations for most of the displaced workers.

‘Most sense' "D-Ham is the one that makes the most sense," Schuster said. "Where it's located from a political standpoint is significant, and one vehicle you could see get saved is the Cadillac CT6. It's really been fluid in terms of what they're going to do with that."

After initially saying the CT6 and Chevrolet Impala would be discontinued in June, GM extended production until January 2020. It already has stopped making the Chevy Volt and Buick LaCrosse there. 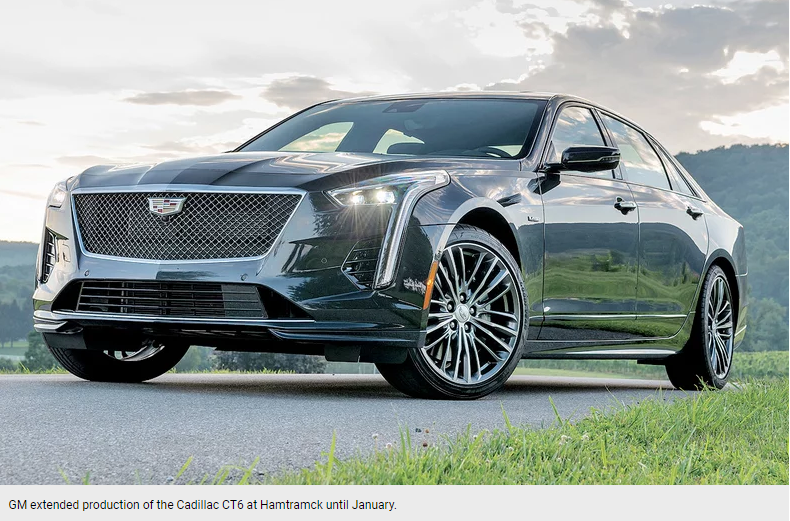 The company could, theoretically, move any number of vehicles to fill the plant, Schuster said. GM built more vehicles in Mexico than any other automaker in 2018, and it could score easy political points by shifting some of that production to the U.S.

It also could commit to building future electrified models in the U.S., Schuster said. GM has said it plans 20 new battery-electric and fuel cell vehicles globally by 2023, although many of those are expected to be for the Chinese market.

GM's U.S. capacity utilization is running at about 71 percent this year, more than 10 percentage points worse than its rivals, according to LMC data. But that doesn't necessarily mean the union will automatically win new product.

"GM might be looking at it as, 'We still have plants that are underutilized. We may have to close those as well,' " Schuster said. "That could cause some negotiating headaches."

Finding solutions GM has significant experience as the lead automaker. It's been the target in three of the past four regular rounds of contract talks, going back to 2007. FCA went first in 2015, and workers voted down the first deal presented to them before approving a slightly sweetened agreement.

Even without factoring in the product allocation decisions, the talks are expected to be contentious as the two sides wrangle over topics such as health care costs and absenteeism.

GM has the highest labor cost per worker, at an estimated $63 an hour including benefits, among the Detroit 3.

GM also has about 4,650 temporary workers, representing 10 percent of the 46,000 people in its U.S. hourly work force, though its annual average runs closer to 7 percent. The UAW is attempting to lower the number of temps used by the Detroit 3 and offer them a path to full-time work.

Members overwhelmingly approved a procedural request by union leadership to authorize a strike if talks sour, and Lightbody said it might be difficult to get an initial tentative deal ratified, similar to what happened with FCA in 2015.

"Management's not going to want to commit to anything they can't deliver on, and the union's going to want to have something to point to so members have some comfort knowing they did everything they could," he said. "There are some solutions out there, but if there's any sniff of a concession, it will have a hard time passing." (article source:automotive news)